There are many myths and rumors about red and tortoiseshell cats, I have a red and a tortie cat, so I have looked at the point coat color inheritance a little closer. In this post you will learn how the coat color of Mona and Luna come about and why they are so special.

You’ve probably heard that red cats are mostly male. Generally speaking, a ratio of 9: 1 means that the probability of a red tomcat is significantly higher.

The tortoiseshell pattern consists of red and black fur parts and occurs almost exclusively in female cats. In tomcats it is very rare (0.43% of all tortoiseshell cats are male).

In Japan, the tricolor cat was the epitome of wealth and power. Sailors often took a white-black-red cat for a safe journey on their ships. In England tricolor cats were long considered a lucky charm because of their rarity. They are told to protect the house from fire:

“A three-colored cat protects the house from fire and other misfortune, the people from the fever, also extinguishes the fire, if you throw them in the same and is therefore called ‘fire cat’. Anyone who drowns them is out of luck or unhappy for seven years; whoever kills them also has no luck; whoever beats her has to do it from the back. The cat attracts illnesses; but her corpse, buried under someone’s doorstep, brings bad luck to the house. “

Coat color and gender is always a whim of nature, and my following representations are just examples for a better understanding: 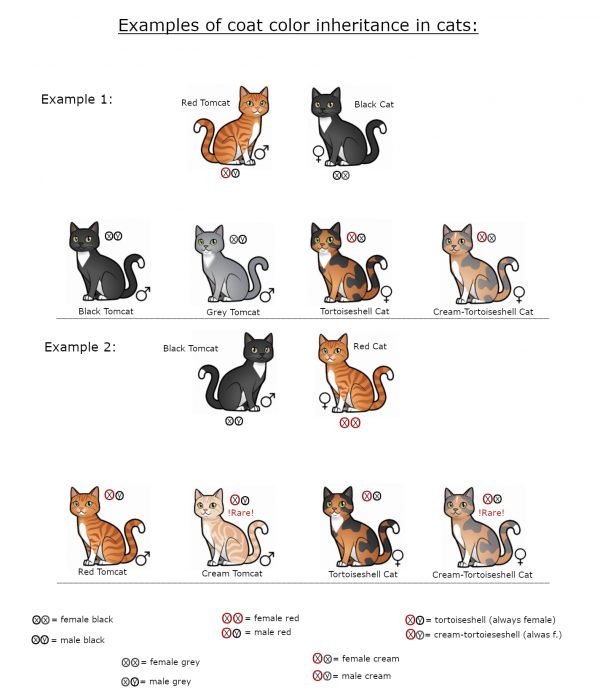 As can be clearly seen in these two examples, no red female cat can arise in both examples. There was always a missing red X chromosome in one of the parents and thus no two red X chromosomes could be passed on to the children. 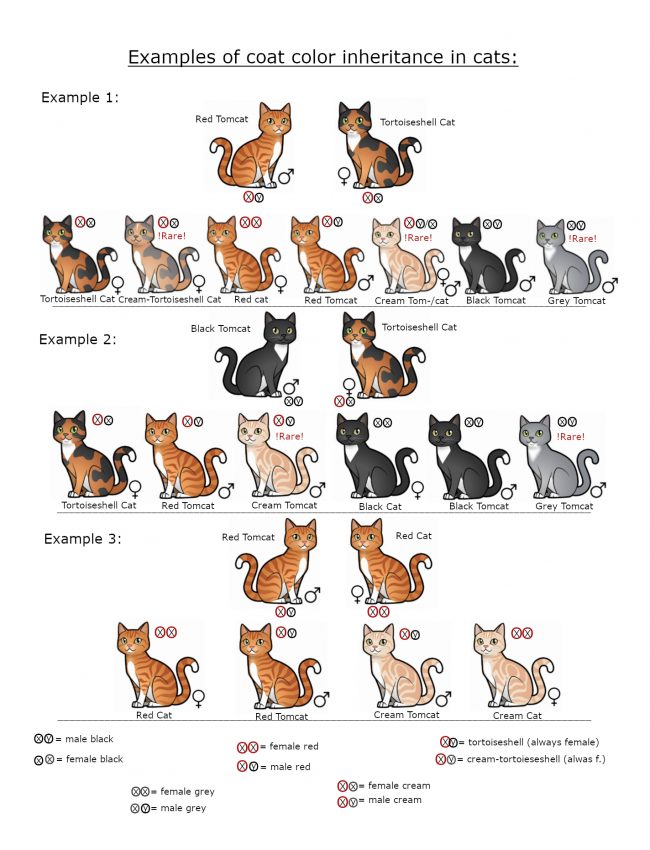 In the first and third example you can see that a red cat has emerged, from both one can conclude that the father must be red in any case, so that a red female cat comes about. The mother can be red or tortoiseshell. So there are only two options for a red female cat. In all other examples you can see that there are several ways that a colorful tortoiseshell cat is created. From this I conclude that red cat ladies are rarer than colorful lucky cats. 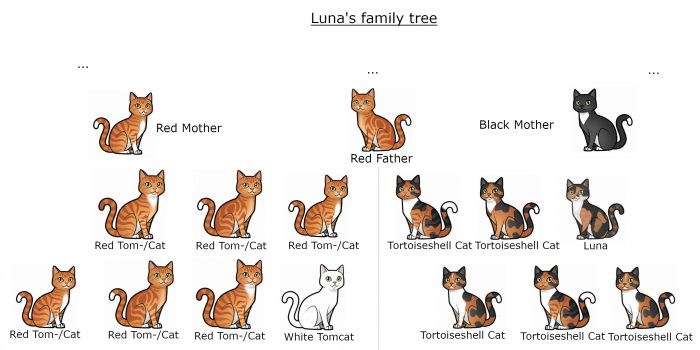 These are the two family trees of my darlings.

In Mona’s case, I know exactly how the parents and siblings look like. I know the parents, Mauzi (tortoiseshell) & Curry (red tomcat). From this constellation, two red cat ladies have emerged, as well as a tortoiseshell cat and a black tomcat.

Luna’s family tree is a bit bigger… We know the two mothers (red and black) and we know that “both” fathers have to be red, that’s why I suspect that all offspring have the same red father. Luna’s siblings are only lucky cats, which is also a great coincidence and very rare. The half-siblings are 6 red cats/tomcats and a white tomcat (genemutation).